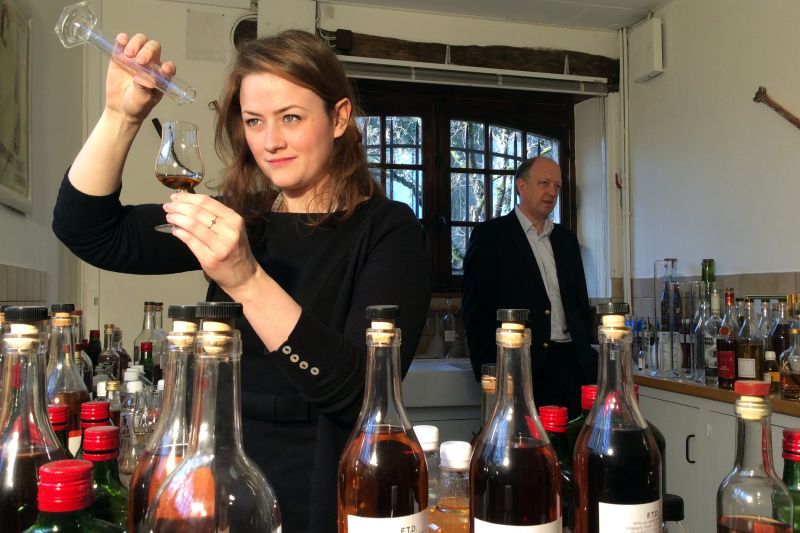 In each bottle of cognac, there is a concentrated «savoir-faire» resulting from a long «cognaçaise» tradition. Alice and Stéphane Burnez invite you to discover the different stages of elaborating cognac in images. 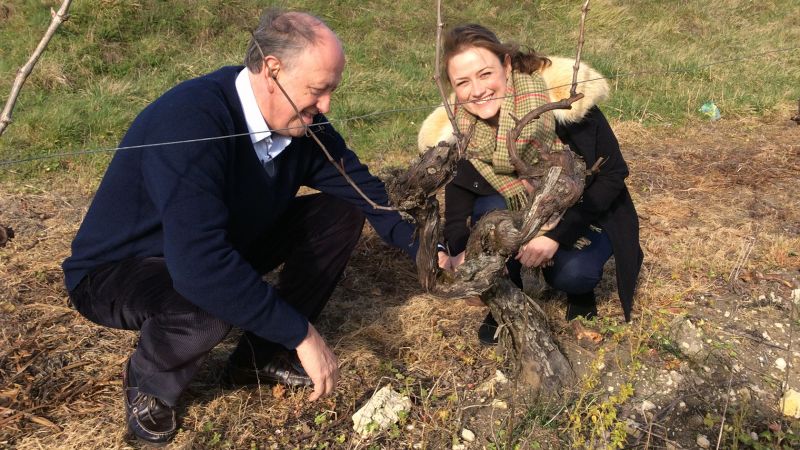 The delimited area where the cognac is made contains about 6,200 wineries producing the white wine that is at the root of the eaux de vie. In the most prestigious growth area vines was grown almost continuously for centuries. Until 1860-1880, the vineyards were established and cultivated "en foule” (in crowd), that is to say in a messy way, and in a very high density (up to 14 000 plants per hectare). The layering of vine (laying down to the ground a vine stock or a branch to replace a missing strain) allowed for new vine to take root from a nearby stock, to replace a plant that had withered. Using this process, the vineyard gave an impression of eternal culture. This is for this reason that the phylloxera crisis was a disaster: it ended the sustainability of the European vineyards. It was thereafter necessary to import American vines to save European viticulture. Since then the vine plantations were organized in lines and density was strongly decreased. 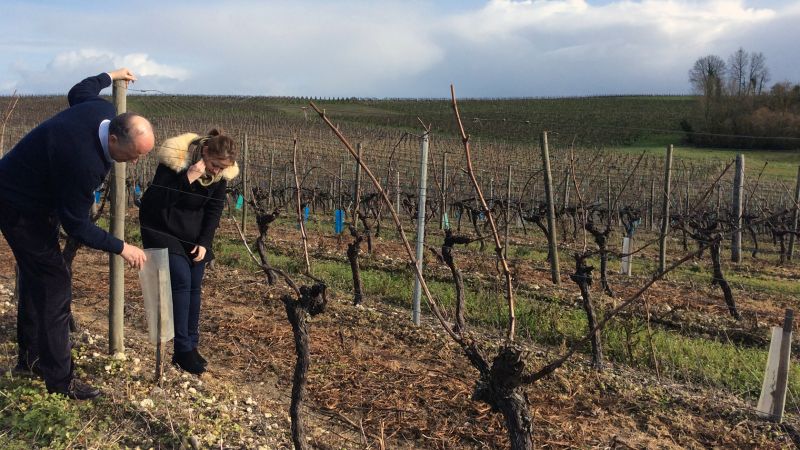 The limestones, deposited in the geological ages, are the foundation of cognac vineyards whose hills function as solar accumulators.

The productivity of old vines is lower but this loss is compensated by the well-known qualitative gain of old vines. Newly planted vine stock will give, qualitatively speaking, a good harvest after a period of 8 to 10 years. This is the time needed for the deep root system to reinstall.

The vinification in Cognac 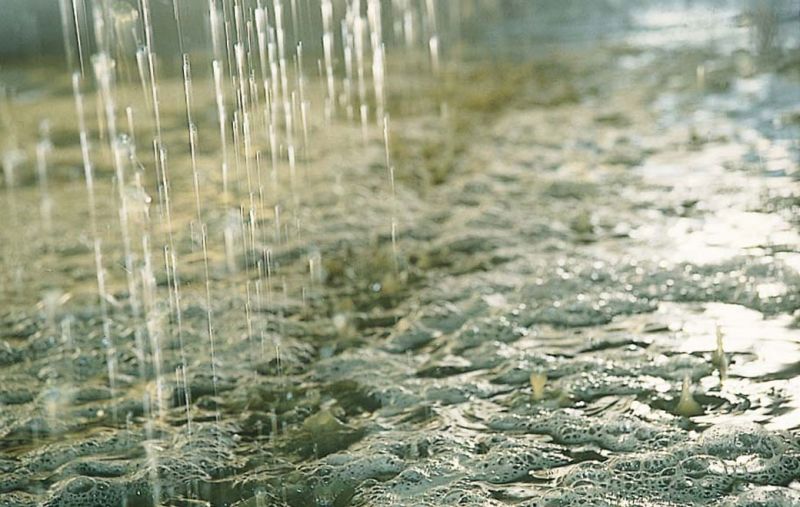 On-going vinification in a tank

A step often underestimated in the manufacturing of cognac but highly important in the winemaking process. Charentais’s wine has two main components: an important acidity and low alcohol content. Indeed, in Cognac no chaptalization is allowed, this step that consist of adding sugar to raise the alcohol content of wine. Note also the absence of sulfites, used in other winemaking regions as an antioxidant and an antibacterial to preserve the wine. This addition is prohibited since the wine is intended to be distilled and this process would concentrate the malodorous SO2 odors. The wine must be created in the rules of art: all the sugar has to be converted into alcohol to create a homogeneous and bacteria free wine. To perform this, the winegrower must monitor carefully the fermentation temperature, which must be within a strict range. It is therefore preferable to use heat exchangers immersed in the tanks and connected to a cooling and / or heating device. The temperature-controlled vats with their integrated control unit unable accurate and precise wine production. After about three months of fermentation the wines contains about 9% alcohol. Acid and low in alcohol, they are quite suitable for distillation. 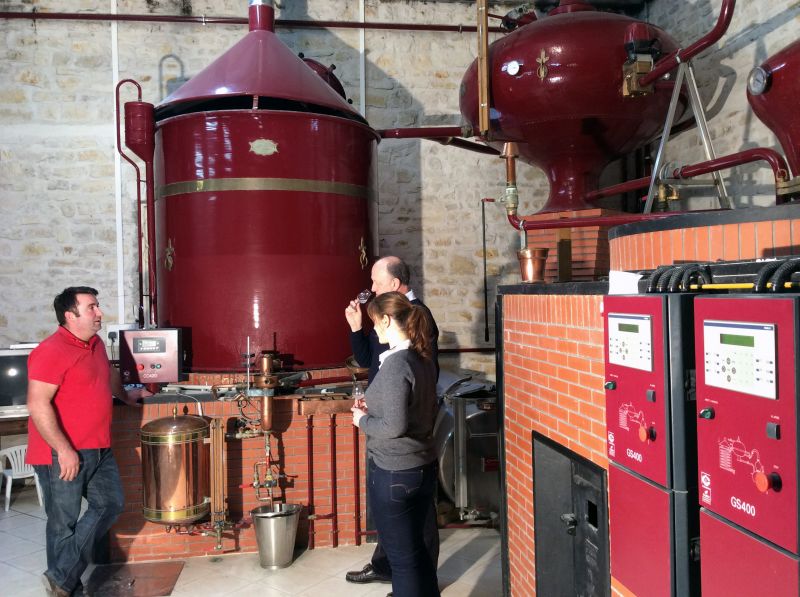 Tasting of the "hearts" with our distiller

2 / White wine is poured into the boiler (or cucurbit).

4 / Alcohol vapors are freed and accumulate in the cowl, the most volatile molecules are the first to pass the swan neck.

5 / alcohol vapors then go into the coil.

6 / the coil is immersed in the pipe containing cold water resulting in the liquefaction of the alcohol vapors called the "low wines" (brouillis).

7 / This slightly cloudy liquid, containing 28 to 32% alcohol, is placed again in the boiler for a second distillation the "bonne chauffe."

8 / The first liters of the precious liquid is very rich in alcohol, those are separated: they are called "heads" (they titrate between 82 and 78% vol alcohol). The "heads" represent only 1-2% of the total volume.

9 / The alcohol content gradually decreases. After the "heads", runs the "heart": this crystal clear spirits will become cognac. 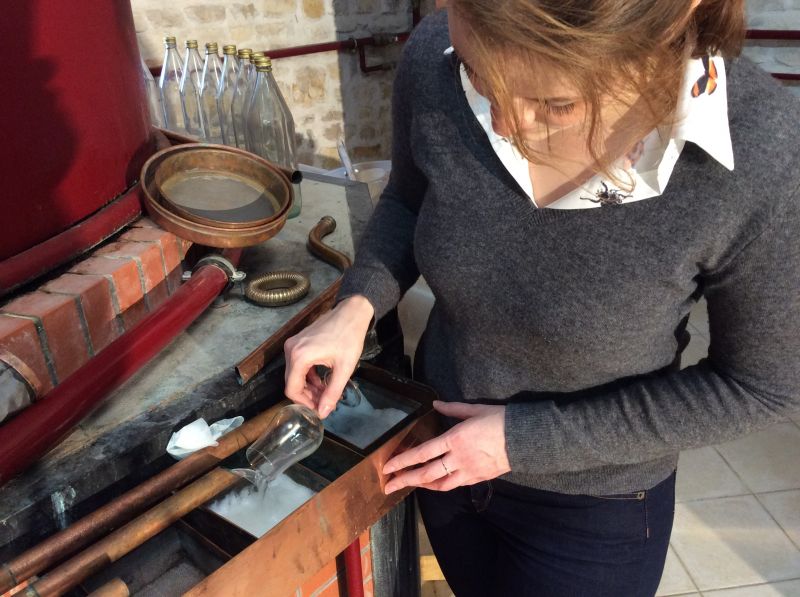 10 / Then comes the "seconds" (in the pictured) and finally the “tails”. "Heads" and "seconds" are often re-distilled with the wine or with the "brouillis".

The successfulness of the distillation, which lasts about 24 hours, requires much attention, constant monitoring and a great practice on the part of the distiller. The distiller can also intervene on adapting each distillation (proportion of fine lees, recycling of the "seconds" in the wines or the "brouillis", temperature curves ...), this will give the cognac elements of its personality.

The cellars and the aging of the cognac 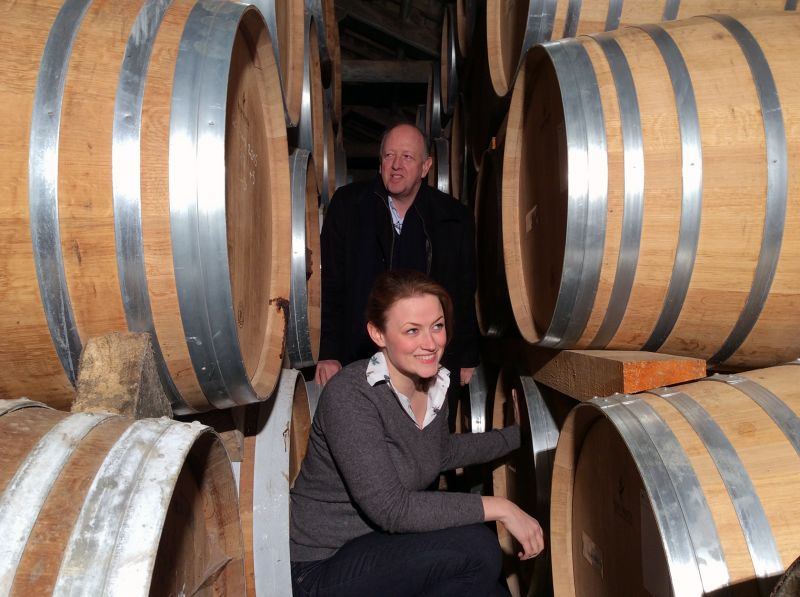 As we mentioned it before, only the heart from the “bonne chauffe” will be aged in oak casks. Each eaux-de-vie has its own aging capacity that the cellar master is able to estimate. The long cognac maturation, which sometimes lasts for decades, occurs thanks to the porosity of the wood that allows indirect contact between the spirit and the ambient air.

Substances extracted from the oak by the alcohol is changing the physical appearance of the cognac, giving it a color ranging from golden yellow to fiery brown. The natural transfer from the oak develops the aromatic bouquet of Cognac. 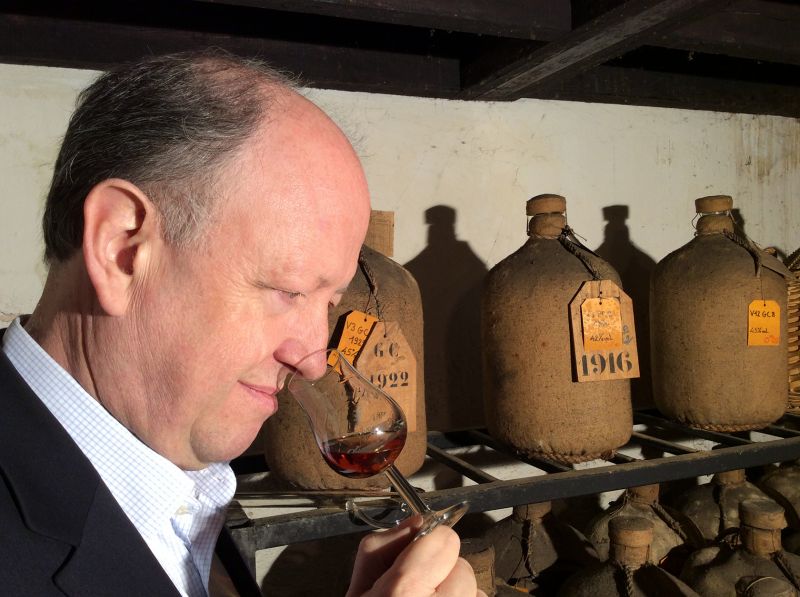 Tasting of eaux-de-vie from the early twentieth century

Ordinarily, an eaux-de-vie never stays more than 50 years in oak barrels, as there would be too many substances extracted from the wood. Once the maturing period is over, we place them in glass bottles called "Dames-Jeannes" to preserve them. In these bottles, the spirits almost never evolve anymore. They will then be used in our best cognacs such as the cognac Extra or our cognac Très Vieille Grande Champagne. 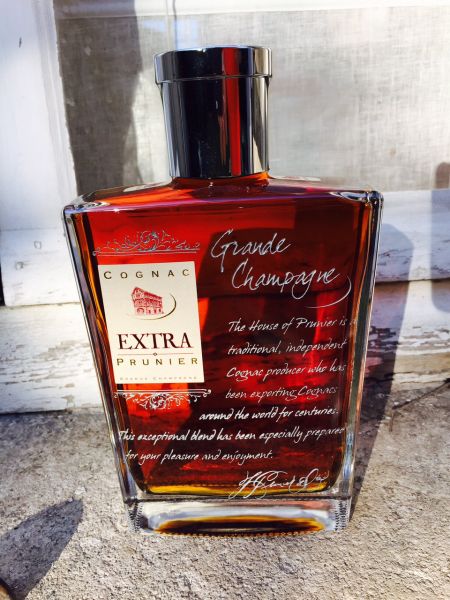